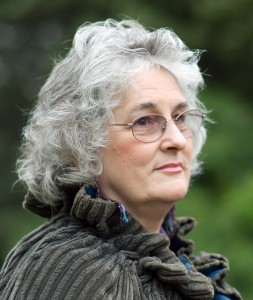 Columbia, S.C. —Aline O’Brien, also known as M. Macha NightMare, has been awarded a Master of Divinity, honoris causa (honorary) by Cherry Hill Seminary in recognition of her many years of service and leadership to the Seminary.

The surprise announcement took place at the October 12 South Carolina Upstate Pagan Pride Day (Greenville area) at the end of a ritual led by O’Brien. Holli Emore, Executive Director of the Seminary, presented an honorary Master of Divinity on behalf of the Board of Directors, acknowledging the vital role O’Brien has played in the life of the Seminary for at least fifteen years.

Originally invited to participate in an online class by co-founder Cat Chapin-Bishop, O’Brien went on to develop and teach “Call of the Dark Mother,” a course addressing issues around dying and death. She recruited many individuals who became faculty, served on the board, or chose to support the Seminary as donors. O’Brien served as a director from 2008 to 2011, chairing the governing body for two of those years.

“Being a living legend within American (and indeed, global) Craft and feminist causes, Macha’s contributions have inspired countless people who need spiritual sustenance during challenging times,” said Jeffrey Keefer, Board Chair. “Macha has been a steadfast supporter of Cherry Hill Seminary’s educational mission and vision over the years, previously serving on our Board of Directors, and it is with great honor that we present this honorary degree for her many contributions to Pagan and Nature-Based spiritualities.”

Emore noted, “While Cherry Hill Seminary is an organic creation which has emerged from the vision and work of a great many people, including our students, it is difficult to imagine where we would be without Macha. She has been phenomenal.”

As a token of appreciation for her many years of dedication, the Seminary gifted O’Brien with a red silk stole embroidered with the Seminary logo which is reserved for graduates.

To read more comments by Pagan leaders about O’Brien, visit this page at the Cherry Hill Seminary web site: https://www.cherryhillseminary.org/about/leadership/tributes-to-aline-obrien-october-12-2019/