Cherry Hill Seminary is the leading provider of education and practical training in leadership, ministry, and personal growth in Pagan and Nature-Based spiritualities. 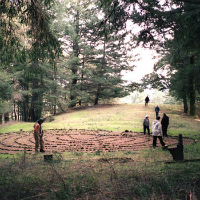 Cherry Hill Seminary: Education in Pagan and Nature Spiritualities to transform the world.

To live our mission we:

Cherry Hill Seminary prohibits discrimination on the basis of race, color, religion, creed, sex, age, marital status, national origin, mental or physical disability, political belief or affiliation, veteran status, sexual orientation, gender identity or expression or any other class of individuals protected from discrimination under state or federal law in any aspect of the access to, admission, or treatment of students in its programs and activities, or in employment and application for employment. Furthermore, Seminary policy includes prohibitions of harassment of students and employees, i.e. racial harassment, sexual harassment, and retaliation for filing complaints of discrimination.

The seed that became Cherry Hill Seminary was planted in the early 1990s by a group of Vermont Pagans.  Classes were conducted first by mail, and then brought online in 2000.  The Seminary was granted 501(c)3 tax-exempt status by the Internal Revenue Service in March of 2007.   Business operations were moved to South Carolina in 2008, and the first master’s program was announced in July 2009.  By January 2020 we have awarded five Master of Divinity degrees, eight Community Ministry Certificates, and numerous former certificates; hundreds have taken one or more courses.

Hypatia was an astronomer, mathematician, and philosopher of international reputation. Socrates Scholasticus wrote that “she far surpassed all the philosophers of her time,” and was greatly respected for her “extraordinary dignity and virtue.” Admired by all Alexandria, she was one of the most politically powerful figures of her time. She was one of the few women who attended civic assemblies and magistrates often came to her for advice, including her close friend, the prefect Orestes. In the midst of severe religious polarization, Hypatia was an influential force for tolerance and moderation. She accepted students, who came to her “from everywhere,” without regard to religion.

We celebrate Hypatia as our Guardian Ancestor every March 15, the assumed date of her birth, and honor her with donations/pledges. Consider joining the Hypatia Society as a way of contributing to equitable nature-based seminary education!